Back to all posts

I’m off next week to the New York Musical Festival, where the Albert Cashier musical will have three readings! We will have a new batch of actors (except Dani Shay will be with us, as our young Al), a smaller ensemble of piano, fiddle, and me on banjo and guitar, an awesome new director Shakina Nayfack, new charts and arrangements, and an edited script. We had a great opening run in Chicago last year, it was the first time the creative team got to see the thing we have been working on for two years actually performed on stage. I got to experience it 30-something times during our seven week run, since I played in the band, but I had to sit in the pit, so I never actually got to see it from the audience.. So it goes. We were nominated for a Jeff Award, a Chicago area awards ceremony running for 50 years – and we WON!! Albert Cashier, best new musical! 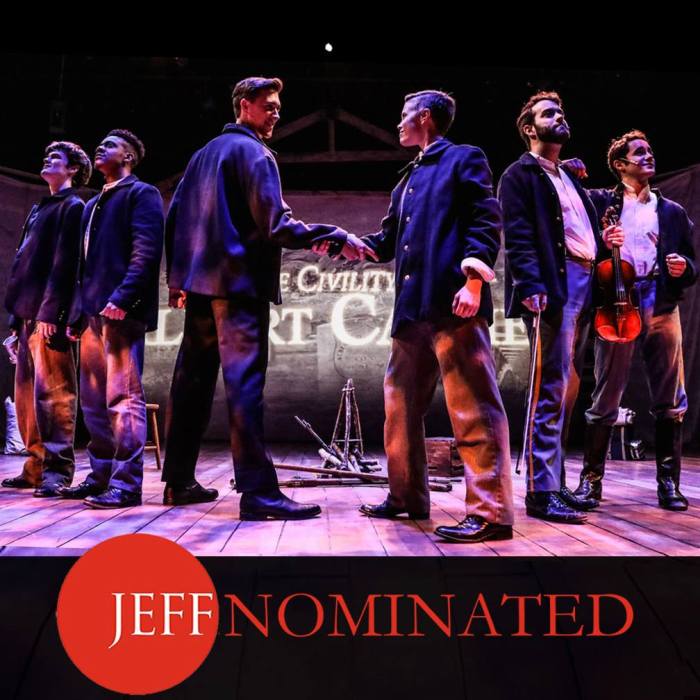 This project came to me totally by surprise – Jay Deratany wrote the script, his friend and fellow writer Keaton Wooden decided it should be a musical, and went poking around for musicians and found me. I had no idea who these fellows were, no experience writing music for theater (except in college), but when asked, I said “sure,” as I often do. Two and a half years later, we are heading to New York to throw our hat in the ring and see what happens next. Ideally, this is an audition of sorts, to find whatever it is that will take us to the next step, whatever that may be. Hopefully there will be a big production next year, either in New York or on the West Coast. 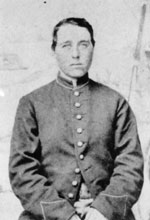 The story is about Albert D.J. Cashier, a Civil War soldier and Irish immigrant who was born female and lived as male. There have been so many questions to probe as we are trying to tell an artistic rendering of Albert’s story.. how did Albert identify? Was he trans or merely seeking opportunity? Was he full-on FTM or maybe just non-binary? What pronouns should we use? I have found the answers seem to be more reflective of who’s giving it than of Albert. As the creative team, we have had endless discussions on what our intentions are, what we are trying to say, who we think Albert was, and what is ultimately important about the story. We have come to a few conclusions – no one can know how Albert would have identified today, with the plethora of modern identity markers available. Albert was illiterate, none of his own words exist in writing. Most of the information we have is from the many letters written by his friends, second hand sources, court documents, and other official records. All we know is that he chose to live as male. That is all we need to know. We don’t need to know “why” he chose to live as male to call him “he.” The creative team takes no official stance on his identity, and that is an important point for us – we do not have to fully understand someone in order to respect their wishes. He chose to live as male, we call him “he.”

In my personal opinion – I do think Albert was probably trans. There are enough tell-tale signs of dysphoria in much of the available evidence, and to me – to go to those lengths to live as male, when it would have been so dangerous and shameful, speaks to the power of one’s internal identity. Yes he had more privileges in society as male, but he couldn’t have a family or children, had to be VERY careful to avoid doctors or injury (which is what ultimately blew his cover), and generally had to live a more marginal life. People unfamiliar with the trans/queer community seem to be more perplexed over the question of his identity, whereas I know so, so, so many trans and queer folks… It is not crazy to think that someone back then might have been trans – it is more of a statistical certainty. One of the most poignant stories of Albert’s history – he was old and ailing, stuck in an asylum for the insane, wearing a dress. He was caught trying to pin his dress together to make some semblance of pants, a last act of self expression when everything else had been taken from him. If it weren’t poetic enough, he tripped and fell in that dress, which caused the wound that he ultimately died from. If that ain’t determination to live as you feel, I don’t know what is. But again – opinions about Albert’s identity reflect the person giving them.

Back to the deeper point – his identity doesn’t actually matter as much as the life he lived and how he was treated. He lived alone, he was a hard worker, a contributing member of society, was in service to his country. When his secret was revealed, he was treated as less than human and died away from his home in a humiliating condition. Albert’s story is more than a story about gender – it’s about how we treat our fellows, how we treat immigrants, how we treat our veterans, how we treat our elders, and in a way – how we treat ourselves. It’s about letting people be who they are and contribute in the way they are called to, even if we don’t understand them. We don’t have to fully understand people to treat them with kindness and respect.

We are running a small fundraiser to help get us to New York, if you’d like to help carry the message, check it out here!!!